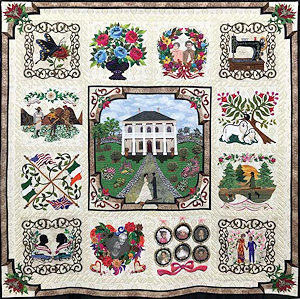 Featured in a two-year commemorative exhibit in Durban and Johannesburg, South Africa

"And Still We Rise,: Race, Culture and Visual Conversations" by Dr. Carolyn Mazloomi. Link to Book

"Conscience of the Human Spirit: The Life of Nelson Mandela: Tributes by Quilt Artists from South Africa and the United States" by Marsha MacDowell and Dr. Carolyn Mazloomi. Link to Book

"Ubuntutu" by Marsha McDowell and Aleia Brown. Link to Book

"My Family Reunion Quilt - A Sentimental Journey in Applique" by Barbara McCraw. Link to Book

Barbara's’ “Lead From The Back” tribute quilt to Nelson Mandela was selected for the exhibit, Conscience of the Human Spirit: The Life of Nelson Mandela, which opened July 26, 2014, in Johannesburg South Africa.

The exhibit, organized by Michigan State Art Museum, will travel for two years in South Africa and the United States.  A publication was issued by the Michigan State University Museum in conjunction with the exhibit of the same name. The special exhibit consisted of 67 quilts, with only 34 from the United States and 33 from South Africa. Because of the high number of entries and high caliber of work submitted to this juried exhibit, Barbara McCraw was honored to be one of those selected and traveled with her husband to the opening at International Quilt Show in Johannesburg. 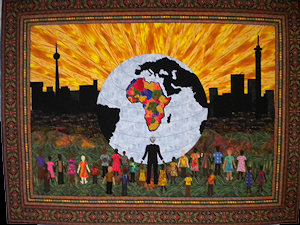 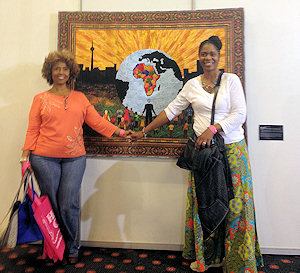 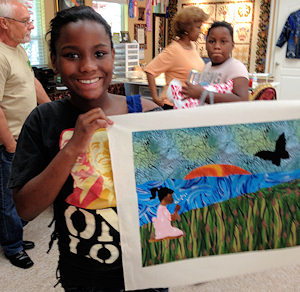 I had the privilege of teaching six wonderful girls how to sew this summer. I had this idea after teaching quilting in Africa last year. I gave a lecture at a local church in February, and afterwards, one little girl came up to me and asked if I would teach her how to sew. I promised her that I would.

Peggy Fox, my friend from the church, graciously agreed to provide transportation.  My friend, Debbie Coates, a very talented quilter, and Katherine, a lady from the church who was an accomplished seamstress, helped me teach the 6-week class. We met all day on Fridays, and the girls learned how to sew by hand, make a pillow with a sewing machine, and make a pictorial quilt. 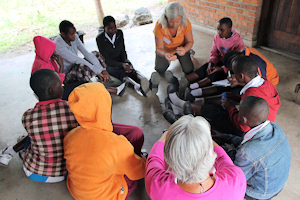 Our purpose in going to Africa was to provide young women and men with a skill they could use to earn a living. Africa is known for its beautiful fabrics, but they only use these fabrics to make garments or sell as is. Most tourists don’t sew, or wear African garments at home, so we felt that if we could teach how to make quilted items from their fabrics, they would be able to sell them to the tourists that visit their country each year.

I was the lead teacher for this adventure that took us to Tanzania. There were seven of us, including four teachers, Hope Edwards, Vicky Mulkey, Elizabeth Kruger, and myself; two husbands, Ernie McCraw and James Mulkey, and Nell Matthews, the coordinator of the trip who had lived in Tanzania. 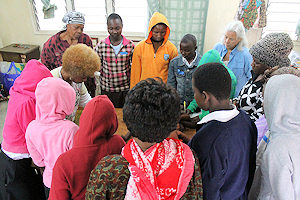 We first visited the Angaza Women’s Center which provides an education for rural girls and women in a number of different areas--nutrition, food services and sewing to name a few.
See pictures here.

Our second visit was to the Usa River Rehabilitation Center. The young people who lived here all struggled with some form of physical handicap. We taught 3rd year sewing students here, so they had a great deal more experience. They produced some amazing work, and our team was later able to provide a one year salary for one of these students to go back to the Angaza center to teach further lessons in quilting.
See pictures here.

We also were able to obtain space in one of the largest tourist centers for them to sell their completed items.

Was on exhibit at the National African American Museum in 2010.

Chosen as one of three in the collection to go into the Smithsonian Museum in Washington, DC. An opening reception in Ohio  was held on April 17th 2010 with Dr. Mazloomi author and historian. 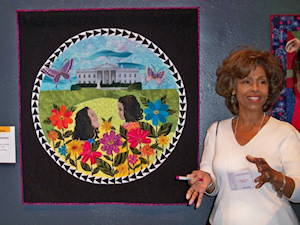 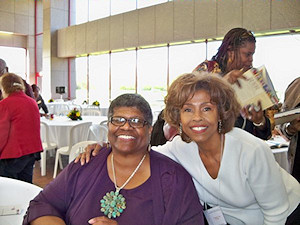 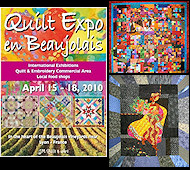 Two pieces Oya II, and Zenobia we shown in Lyon, France at the Quilt Expo en Beaujolais over the week of April 15-18th.  An ancient wine cellar in the heart of the French wine country was used as the exhibit space creating a unique surrounding for the two award winning quilts.  Include pictures of the Guards in French Uniforms at the exhibit.

May 1st  was the Texas Fiber Arts Exhibit at the Mexican Cultural Center  Center in Austin, Texas.  This was a juried show where only 50  pieces  were selected from hundreds of entrys.  Barbara was excited that two of her unique coats were chosen..  “The Gospel Truth” and “Piano Dancing” were both shown in a glass atrium where the overhead full natural light brought out the detail of their exceptional stitching.  The colors in the Gospel Truth were highlighted by the exceptional installation which allowed the coat to rotate freely with any air movement within the atrium and the 360 degree spin showed off the viewing of both front and back panels.

In 2009 the Texas Fiber Arts Exhibit in Austin featured “Big Blue” on the cover of the show catalog and shortly thereafter the piece was sold to a native Texas admirer. 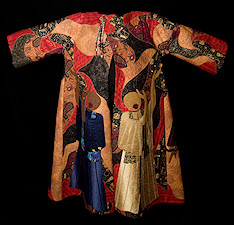 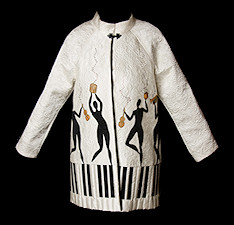